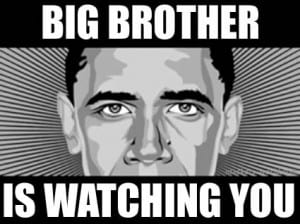 From cell phones that track your every move to government agencies now turning to social networks to monitor people – it seems privacy is quickly becoming a thing of the past.

We have seen how Social Media has been used to transform the way people communicate. Some say social media played a major role in the Arab Spring and the uprising of the Occupy movement. But as the government uses it to keep tabs on people, using social media may come with a price, that price being your privacy.

There once were 7 words you couldn’t say on television. George Carlin, great comedian, talked about that and lampooned it. Now there are over 500 words you cannot say on Twitter or Facebook or the government will flag and monitor your tweets and your Facebook posts.

First question: Where is this information going?

Most people tweet, they are just talking to their friends or post on Facebook and think only their friends are reading it. Guess what? It’s not! The US Government Homeland Security is reading your tweets and monitoring your Facebook posts.

Let’s get to those 500 words that will set off alarm bells from the Department of Homeland Security if you use them on Twitter or Facebook.  Some of them seem pretty harmless and words that everyone is using every day. Here are some of them: “subway”, “delays”, “cloud”, “pork.” These are some of the words that can cause them to keep tabs on you.

That really makes you raise the question of the effectiveness of this program and how well they are spending tax payers’ dollars. And there is also a concern that they hired General Dynamics, a multi-billion-dollar defense contractor who makes tanks and weapon systems to spy on American citizens.

As Americans, we should know what our government is doing, how they are monitoring us. You tweet something innocently about a wave or a cloud, and all of a sudden you are on a file somewhere.

Second question: Is this something the American government should be doing?

It sounds more like something you would see in a country where government is trying to oppress their people. Not inAmerica, where we have this freedom of exchange of ideas, we don’t have to worry about the Big Brother watching us, but, in fact, we do.

If we do not stop now, if we do not stand up now, or at least ask questions now, next thing will be they are reading our Facebook emails and Twitter direct messages, and before you know it – your regular email.

When you give up some liberty in the sake of security, as Ben Franklin said, you lose both

It looks like government is looking for us. Not terrorists, not drug dealers like they say, but the average American, to see what we are tweeting, what we are thinking, because for a lot of people our tweets are our thoughts.

And it goes back to the slippery slope, if we say willingly: “You can have more of our privacy, more of our liberty”, we are going to lose it more and more and more. We have to at some point stand up, we have the Patriot Act – very few people object it. There is spying in New York of Muslims simply because of their faith, of students and people with whom they work and they pray. Now it is broader. If it was not for Epic following this lawsuit, we would not have even known the details of this program.

It’s great a group like Epic filed a lawsuit. We wish the government would just come forward and come clean as much as they can.

This article is written by Alex Lamman. He is a 25 years old software engineer, snowboarder and just a loving father from Ohio.

Alex Lamman is a 25 years old software engineer, snowboarder and just a loving father from Ohio. He is Internet security addict and helps to run http://privacy-pc.com.