The iPhone 4S is the latest cellphone from Apple. Since it has so many features it won’t be appropriate to think it is just a phone. It is a sort of mini computer.

The iPhone 4S comes in two colours – white and black. Don’t be upset if you need more colours. “iPhone Bumpers” are available that can be made to fit the edges of your iphone that will give it different colours. 6 such colours are available.

Yes the device is expensive but considering its usefulness it is worth it.

My iPhone never leaves my side, and I’m constantly amazed at how much work I can get done on such a tiny device. –David Appleyard

Wi-fi and 3G are obviously supported. Net access all the time.

Two cameras are built in – one at the front and the other one at the back. The front camera is for video chat and is VGA. The back side camera is of 8 megapixel quality. It includes features like autofocus, face detection in still images, LED flash, video recording in High Definition (HD) 1080p.

iPhone 4S is using a software named Siri – which is pretty unique in its own way. Siri enables you to talk to your iphone!

Just say what you want your iphone to do and it will be done. See the image below for what I mean. 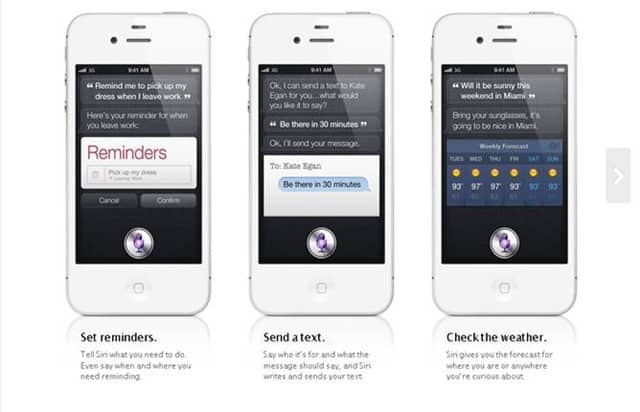 Though there are some softwares that convert speech to text on your computer but they all need special training. You need to speak only in a special way so that that software can interpret it. But with Siri, it is not the case.

Having the iPhone 4S is like having a personal assistant.

Apple claims that in 2012, Siri will support additional languages, including Japanese, Chinese, Korean, Italian, and Spanish.

iPhone 4S works on a dual-core A5 chip which results in seven times faster graphics and two times more power than the iphone 4.

And yes! The apps store has more than 5 lakh apps so you can do virtually anything from your iphone.

With iphone 4S, Apple has proven yet again that they are the best cell phone makers.

This article is written by Lax. He is an active blogger in Indian blogosphere. He love to play around Tech and Design niches. You can check out his recent project is PNR status check which provide fast and accurate pnr status for train and air travelers. If you wish to write for us, kindly check this.

Lax is an active blogger in Indian blogosphere. He love to play around Tech and Design niches. His main blogs include 2ExpertsDesign.com, TechZoomIn.com, HostRider.com, etc... his recent project is pnr status check which provide fast and accurate pnr status for train and air travelers.