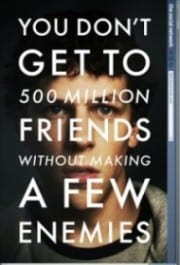 The Social Network is a movie about the founder of the most popular social network website till date — Facebook. It officially opens in theaters today.

I really love the tagline of this movie “You don’t get to 500 million friends without making a few enemies”. True words and I’m waiting eagerly for its release in India, which I believe would be around 10th Decemebr 2010.

This movie is directed by David Fincher and written by Aaron Sorkin. Jesse Eisenberg plays the role of Mark Zuckerberg, the talented CEO of Facebook.

The movie “The Social Network” was adapted from Ben Mezrich’s 2009 book The Accidental Billionaires: The Founding of Facebook: A Tale of Sex, Money, Genius and Betrayal, the film focuses on the early years of Facebook, founded in 2004.

If you a pop and rap fan, then here you go, Justin Timberlake plays the role of Sean Parker (Co-founder of Napster). Filming for the movie, The Social Network, began in October 2009 and finally in theaters now. Avoid torrents, and give some light to theaters.

So did you watch this movie? Do share your opinions below as comments. Cheers.