Utilize Twitter In Real Life – Save Money On Groceries

As technology continues to expand well into the 21st century, advertisers and marketers are coming up with brilliant new ideas to arouse interest from the shopping public. Online companies use social media sites such as Facebook, LinkedIn, MySpace and Twitter to entice the public to buy their products and services.

Now, supermarkets and grocery stores are using Twitter to post their weekly ads, coupons, and discount sale prices on the Internet. This allows shoppers the ability to find grocery coupons before going to the store and picking up the weekly advertisement.

The following is a list of some of the Twitter accounts that offer grocery coupons to their followers:

More Grocery Twitter accounts to choose from: WeFollow list (choose accounts there depending on your shopping preferences and location).

Twitter search is another powerful tool you may take advantage of. 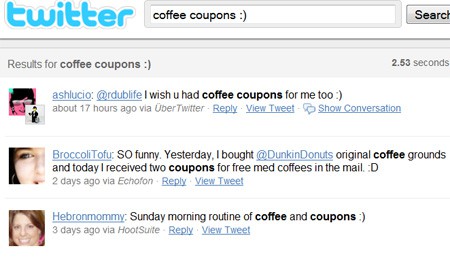 What is the Catch?

So you might be asking yourself what the catch is with these Twitter grocery coupons. Well, the deals offered via Twitter typically can only be found on the social media giant’s website and nowhere else on the Internet or even in store advertisements.

So, if you are all about saving money on your grocery bill, consider following one or more of the Twitter accounts listed earlier in this article.

As with all coupons, the ones you find on Twitter will more than likely have restrictions on their uses such as the following:

Twitter has not only become a social media giant for finding out breaking news or telling others what you did last night but it has also become an outlet for companies to promote their in-store deals. Saving money on your groceries has become even easier these days with Twitter.

Make sure you follow the name above closely because the coupons are posted at random times for fleeting moments and cannot be found anywhere else on the Internet.

These deals do not last long either. Some of the coupons will expire within days of them being posted to the Twitter account, so be sure to print them out and use them as soon as possible in stores.