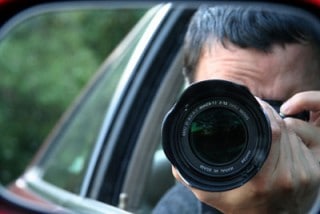 They’ve got a snub-nosed .38 special in their holster, a bottle of whiskey on their desk, and a chip on their shoulder. They while away the hours in a cramped, file-strewn office until some femme fatale with tears in her eyes and a crazy story offers to pay their daily rate — plus expenses. That’s when they start unravelling a mystery that’s much bigger than it initially appeared.

While hard-boiled novels and Hollywood movies like to push a certain image of people who investigate for a living, the real thing is rarely so moody or exciting. Here are the most common myths perpetuated by popular depictions of Private Investigators.

In the movie Chinatown, an investigator played by Jack Nicholson discovers a conspiracy by checking property ownership records in a county office. While these sorts of offices still exist, most private investigators have gone digital, seeking out public records online.

Most PIs that you see in movies, like Eddie Valiant in Who Framed Roger Rabbit, are misanthropes who keep everyone an arms length away and do all of their work solo. But the truth is that being interested in, and socializing with people is an important job skill.  In fact, PIs rarely work by themselves. They usually work for an agency or large company. According to the Bureau of Labor statistics, only 1 in 5 private investigators is self-employed.

3) They All Track Down Cheating Spouses

Many TV and film private detectives can be seen outside of a motel, waiting for a man and his mistress to stroll out so the hired investigator can take pictures for the wronged client. In truth, “domestic cases” only take up a small slice of what private investigators do. They also find missing people, help legal firms collect evidence for cases, and help corporations track down information about institutions they are doing business with.

4) They Have Slick Rides

In the television show Magnum P.I. Tom Selleck cruised around the streets of Oahu in a firetruck red Ferrari 308 GTB. While a flashy and fast car might make for great TV, it doesn’t make much sense if you are trying to perform a real investigation. Sometimes hired detectives are required to spend hours in their car trying to spot a particular person they are investigating. Stakeouts would be a lot less effective if you tried to do that in an expensive and brightly colored luxury vehicle. So when most investigators go car shopping, they opt for a car that would easily blend in if it were parked on the street.

Since they work privately, hired detectives have fewer freedoms than police detectives.  Which means that they can’t seek a warrant for things like property searches and bugging phones. Like everybody else, PIs have to abide by state laws when snooping around.

This article is written by George Haskins. He is a blogger living Palo Alto, California. He writes about online research, private investigating, and social media.