We’ve seen a ton of blogs come out of the woodwork lately, and websites too. Each of them has been trying something different- some succeeding, some failing, some just being somewhat mediocre.

Since we’re in the age of people powered information, I think it’s only necessary that we implement some kind of engagement aspect into our blogs. Most do this by allowing user comments and having an open ended question for users to respond to. It’s a great way to give your blog legs and allow others to take on the conversation.

But for websites who offer a blog, along with other elements, sometimes you need more than this.

There are a few examples I wanted to bring to light.

#1 – Launch something that can exist with your old user base, but still engage a new user base.

A good example of a website, with blog integration, who has taken the next step is This or That. This or That is user powered- offering neat little match-ups where you can vote on what you prefer, or what your opinion is. It then shows you the percentage of those who voted for each, and it allows you to share this on your social networks. 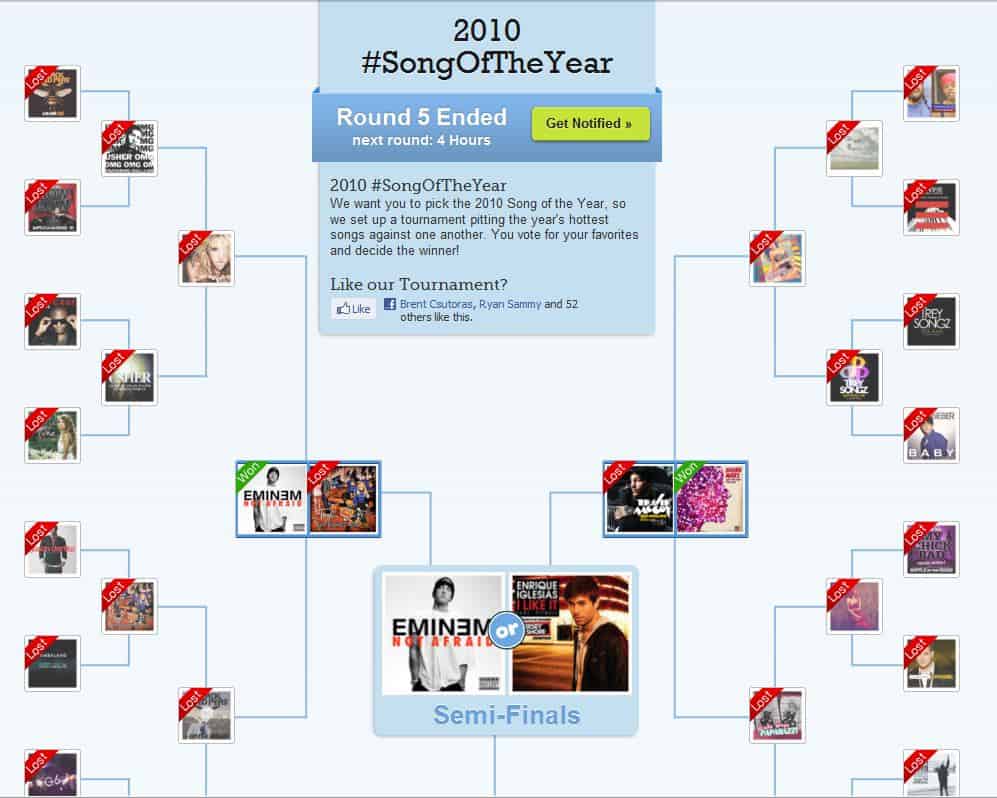 They recently launched (and it’s coming to an end in the next few days) This or That’s 2010 #Songoftheyear Tournament- playing off the original user engagement on their site and allowing for fans to actually pick the song of the year for 2010. It goes through 6 rounds- each with extensive match-ups, until it’s narrowed down to only two in the final round. Original users of the site will see this and participate, and the vertical is strong enough where it can pick up new/external users as well.

The interface is easy to follow and allows you to see the past match-ups.

Nothing is more annoying than when you’re on a user-powered site and get lost in everything. When you’re sifting through contests, submissions, etc, you want to have some place to get back home, or back to the previous screen. This is a simple user interface tip that you should take note of- many look over this.

If you’re running something user powered, make sifting through easy. The little area I circled in the above graphic lets you go proceed to the next match-up to vote on. Simple. 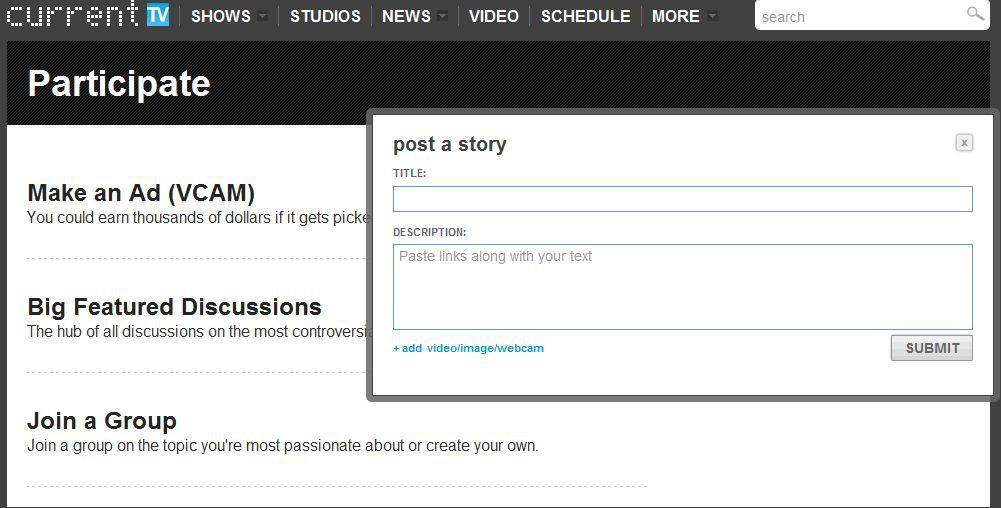 Current TV is fun. I used to watch their channel way back in the day, and then I realized they had a website where I can pretty much consume everything in one sitting. I also realized they’re pretty much user powered- allowing submissions and engagement for users to actually help choose what makes it and what doesn’t.

Now, allowing user submissions clearly isn’t for everybody. It takes the building of a community for it to take off and be successful. It can be extremely powerful, but you also have to plan for spam and random crap. Not everything users submit will be worthy, but the nice thing is you can pretty much allow the community to cannibalize whoever the person may be who isn’t contributing useful content.

Behance.net is a network with the 99 percent (one of my favorite sites, if you know me well) and they’ve taken on a life of their own by having Behance.net become a community for creatives to showcase work. They’ve also offered action products, both online and offline, that allow you to execute tips and ideas you find on the 99 percent. It’s a great network and has definitely provided users with many ways to learn, share knowledge, and engage.

Complimentary community sites always work great when coupled with a blog. Give them somewhere to showcase their stuff.

I know I love to give examples in my posts, and I wish I could give examples of all sites that implement great ways to tie the blog in with an active community, but there are way too many to list. I selected a few, that I frequent and know of 🙂 Hope this sparks some wheels turning.