Quizot – For Those Who Like To Quiz And Learn

The latest buzz and talk among fellow quizzers in the quizzing circuit is about a brand new platform, Quizot, for quizzing enthusiasts and self-learners who are looking for something fresh, interesting and compelling.

Quizot, was launched about a month ago when it was launched in New Delhi by childhood friends and now, co-founders, Varun Jain and Akshay Bajaj, who have been active on the quizzing circuit during their school and college years.

Users on Quizot get to choose the topics they prefer to be quizzed on out of the various topics provided. However, unlike the type of quizzing most people are familiar with, such as the ones popular in schools, and trivia based quizzing which is more along the lines of quiz shows on television like the Bournvita Quiz Contest or even the infamous Kaun Banega Crorepati, the format of questions on Quizot very much follows the kind of quizzing seen mostly in Engineering and MBA colleges.

The user gets 10 questions for each quiz and each question has an individual time limit. For each correct answer a user receives credits. A user can also go ahead and contribute questions to Quizot using the ‘Add a Question’ feature. Answers are evaluated for both spelling and the time taken along with accuracy. Credits usually vary from 0 to 10 for a user’s response. For adding a question 20 credits are awarded.

How did it come about?

You must be aware of quiz blogs and groups on Facebook and other social media websites, but have you ever noticed how a question is rather short-lived in most of these places? As soon as somebody answered a question, there was no incentive for anybody else to work on it. 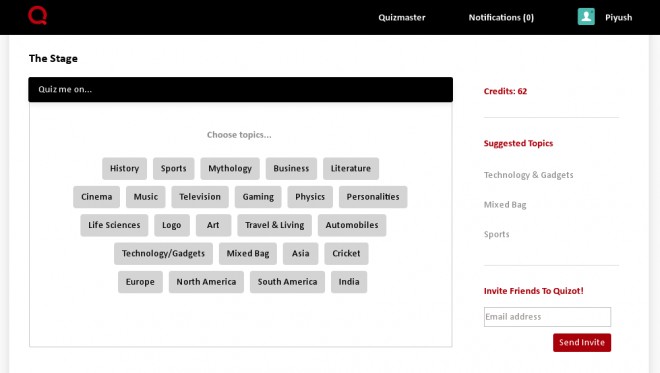 The founders of Quizot had a notion about how online quizzing should be done. That’s what prompted them to start conceptualizing, and after lots of brainstorming, Quizot came into the picture.

The difference between Quizot and other quizzing websites

You see all these quizzing websites that keep coming up every now and then, and they’re all the same with the same features, the same type of questions, the same boring rules; you get the idea, right? But there are many of Quizot’s features that make it stand out.

“Crafting a question for quizzes requires a specific style of writing.”

A lot of research and efforts are being made to keep the content on Quizot interesting, exciting and fresh. It is tightly controlled and each question is reviewed before going live. This ensures that only quality questions survive. 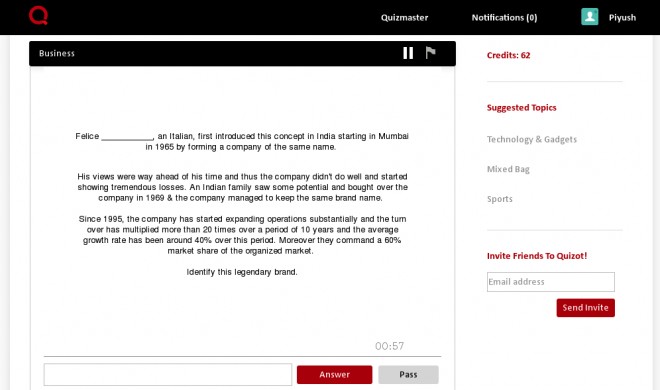 None of the questions repeat. The team goes to great lengths to remove duplicate questions. Funny, intriguing and dramatic at times, these questions are aimed at capturing a user’s imagination and drawing them in.

The User Interface is well thought out, simple and interactive, without being loud or garish. The ‘flag’ and ‘add a question’ options make it possible for quizzers to be involved in the process.

The team is yet to receive a query like “How do I do this?” or “What does this mean?” That goes to show that the application is quite easy to understand and use. That’s exactly the type of no nonsense, intuitive application that the team had aimed for.

It may surprise many users that there are no options for the answers. The answer has to be typed in and they are evaluated using complex string matching algorithms.. This is a feature that makes Quizot exactly like standard quizzing events. It makes a quiz more challenging and fun too!

Most quizzing websites are prone to “Google-able” text and don’t give any answers or explanations, or are limited to questions mostly from a certain predefined source but Quizot provides a healthy combination of all, and the topic selection makes it even better.

According to the feedback and suggestions received by the number of users Quizot has had in the past few weeks, here’s a list of pros and cons:

Quizot has been built using Ruby on Rails on the server end and HTML5,JQuery on client end. The application employs MySQL for storage. Several optimization techniques have been used to make ensure high performance and minimum waiting time for the users. To this effect the website close follows Steve Sounders guide to High Performace Web Sites.

Varun Jain, one of the founders of Quizot and a graduate from Delhi College of Engineering, quit his job at Deloitte after working there for about a year and a half to work on his first start up.. In April 2013, he decided to start work on Quizot with his childhood friend and avid quizzer, Akshay Bajaj, a graduate from VIT, Pune. Akshay had been at the forefront of all student activities in his college, and had even represented India at ISFIT 2011 (Norway). Putting these skills to good use, he takes care of the business and content aspect of Quizot.

The current status of the project and the future

Quizot is a bootstrap start up with no funding, and it is not looking for funding at the present moment. The concept development started this year in late April, and then product was launched with practical features around second week of September.

Currently it is a minimum viable product with many more features in the pipeline and right now access to Quizot is on invite only mode. Users can invite their friends using email invites.

Though there are many features like difficulty levels, user statistics and explanations of answers that are currently being worked on and will go live in a few days, the main aim for the future is to follow the same guiding principle and keep the content as hygienic as possible while being inclusive.

If you are a quizzer or someone who just wants to learn something new in a fun way, and are looking for a change and for something exciting and new in the quizzing world, you should definitely check this out. I believe it’ll be worth your time.

Editorial Staff at HellBound Bloggers (HBB). We are basically a web magazine, covering various topics ranging from internet to lifestyle activities. HBB is a part of Slashsquare network.