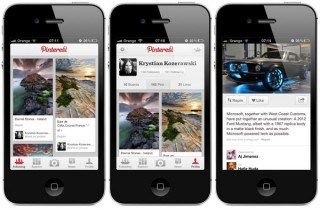 Pinterest – An online shareable scrapbook, which is a collection of collections. Right from day to night, anything that is up to the interest of users is shared in terms of images by means of Pinterest. As we know well, Pinterest is now a massive social network revolving all around the web, with several millions of users crabbing their minutes and hours in front of PCs and laptops in the name of Pinterest. And now, the site has slowly headed steps into the mobile world also.

Yup! With Pinterest mobile app, Pinterest services can be straightly reached via mobile devices, which means users can access their Pinterest accounts on-the-go. Android users were longing for several years to have a Pinterest app, which was finally delivered by Pinterest in the Google Play store. It was in August this year, Pinterest offered apps for Android and iPad, while the company had long been into providing apps for iPhones. These apps can be downloaded by means of the Pinterest mobile apps page.

It was in 2011, Pinterest released a dedicated iPhone app for Pinterest-iPhone users. Later in august 2012, the app was pretty decently upgraded and released. People noticed the speedy factor to be highly convincing when it is used with the iPhone 4S. The app allows you to do everything on the Pinterest website on your iPhones and offers a more than same experience as that of accessing the site via desktop or laptops. Your Pinterest account can be accessed only by a registered user and others can only simply browse images.

Pinterest is all about images and how come the images visibility in hand held devices? The August 2012 upgrade version of iPhone app has been created with an excellent image visibility and a two-column design for browsing, which lets you view more pins at once. The iPhone – Pinterest app is neatly focused and displays five buttons across the bottom of the screen and icons for Following, Explore, Camera, Activity and Profile. The ‘Following’ button allows you to browse recent pins of people you follow and ‘Explore’ displays a list of themed categories which you can browse. With ‘Camera’ option you can take a photo and pin it the same moment with your phone. This is an ultimate option is greatly time saving as you can take pictures at any time and directly upload it to your Pinterest profile.

Pinterest Android app is the most awaited Pinterest application by android-ers worldwide. This app, designed exclusively for all android devices has so far received positive reviews from its users. Users find that this app has made pinning ultimately easy and speedy. It covers almost all of the basic functions available on the Pinterest official website. However, people find it difficult to edit or change the descriptions on image boards and edit the user profile within the app.

Launched in August 2012, iPad Pinterest app is similar to the context of pfficila iPhoen app, but differs in design and functionality. The iPad’s touch screen capability is widely mattered by iPad app, as it allows users to swipe the slide and view a list of available categories. It has a built-in web browser and integrated pin-it button, which makes pinning images to the pin board quite easy. This app falls with a single limitation of not allowing advanced editing for boards and hence feels a bit unbalanced.

This article is written by Riya Sherin. She is a designer who has a love for creativity and enjoy experimenting with various techniques in web. If you wish to write for HBB, kindly check this.