Outsourcing And The Economy: The Debate Continues

Outsourcing continues to be a controversial topic as President Obama and his financial advisers, the likes of Ben Bernanke, have the arduous task of providing more jobs in the U.S. economy.

With immigration and unemployment taking significant space among the American public, outsourcing often sends a message of anti-nationalism in the sense that it ‘takes away jobs of Americans.” However, that might be a one-sided story. Many analysts say that prevention of a major financial downturn like the one that occurred via the subprime debacle and the housing recession is going to take some heavy IT infrastructure and a highly talented pool of talent available only through outsourcing. 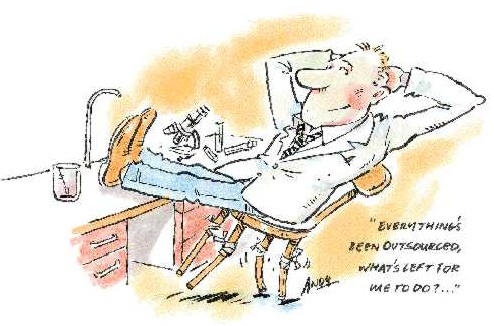 Nonetheless, skeptics say that the Obama administration has not taken a tough stand on outsourcing. In fact, some say that it has encouraged it. While the President was clear on his rhetoric during the election campaign that there would be punitive measures taken against companies moving jobs across the border, that appears to have changed a bit after his election.

Recently, the President remarks that he would revoke tax breaks from outsourcing firms during his State of the Union speech in Washington caused havoc among IT service providers, particularly in India. While the U.S. enjoys the close company of India in deals like the recent nuclear deal, there can be little truth in holding back jobs from outsourcing, particularly since the financial sector is going to need plenty of fixing in the IT department in order to withstand similar crises in the future.

Others believe that the U.S. has really done nothing to discourage outsourcing like other developed nations that promote their own products and labor ahead of profits. According to the AmericanEconomicAlert.org, the President’s option to head the bipartisan debt deficit commission with the boss of an outsourcing firm reflects his policy on the issue. The agency holds that the nation is not tough as it should be when it comes to unemployment in the U.S.

With the topic of health reform taking up center stage in the Obama agenda, outsourcing seems to have taken a seat on the back burner. In general, it is believed to be true that the U.S. has taken a ‘hands-off” policy towards its economics. In contrast, government in Europe has more of a say in companies that provide a large chunk of jobs for their nationals. One example of is Toulouse, France-based Airbus and the recent restructuring that has taken place via the negotiations with the French government.

Skeptics say that the system of economics in the U.S. does little to encourage firms to put national goods and services above bottom line profits. Since capitalism promotes profits, other aspects like sustaining jobs in the country are overlooked in exchange for running operations with higher cost efficiencies at offshoring locations. There is also criticism that the tax system in the country is designed to encourage outsourcing. While foreign countries splurge on rewards to attract outsourcing to their countries, there is little in the way of tax benefits to provide incentives for American businesses to hire American workers and use American facilities. In fact, the new halt of tax breaks suggested by President Obama might do more harm than good in term of keeping U.S. firms from outsourcing jobs and business processes.

Globalization, a Push For Outsourcing

It is clear that as globalization and the interconnectedness of the global marketplace will mean different strategies in the future that it has been practiced in the past, the issue of loyalty toward workforce or region will continue to take declining prominence in the outsourcing formula. The trend of capitalism is to book profits to shareholders, without seeking sustainability of business in any one particular area of the world at any given time. Shifting businesses from country to country would be easier than it has been in the past. Often, if a company has to be competitive globally, it is fair to say that national interests cannot take precedence.

Alternatively, one can take the side of the argument that the U.S. insources services from abroad. As an example, Toyota and BMW have manufacturing units in the U.S.

This is identical to Honeywell and Nike manufacturing in China or India. Nonetheless, the argument does not taken into account the basics of outsourcing. Although BMW produces cars in the U.S., these automobiles are not marketed in Germany. But Nike shoes made in China are sold in the U.S. – most of it at least. This translates to the German labor market does not suffer losses when BMW manufactures cars in the U.S. But the vast difference is that the U.S. labor force takes a big hit when Honeywell opens facilities in India.

This guest article is written by Jacob Cherian. If you wish to write for us, kindly check this.