Do Your Part To Prevent Internet Censorship

Internet censorship is the control or suppression of the publishing of, or access to information on the Internet. It may be carried out by governments or by private organizations at the behest of government, regulators, or on their own initiative. (via Wikipedia) 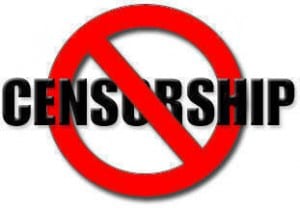 Internet censorship is hot topics these days. Indian Government has blocked a handful of site, UK has censored The Pirate Bay, and loads more. Many people are protesting, and against this censorship, as they believe in a free (and better) Internet. This article will detail what you need to know about internet censorship, and how you can help preventing it.

Uhh… I see you wrote that India’s government is censoring things? Is it true?

Yes. The Government of India is censoring many sites. A few examples are vimeo and pastebin.

This all sparked when the producers of movie “3” took the matter of piracy to the court. Kapil Sibal, along with others, passed an order to censor many types of websites. Many video websites have been censored because of this.

The reasons are obvious. The Pirate Bay promoted piracy, and UK couldn’t take it anymore. The good news is, people can still access the site, either by changing their DNS, or using Proxies.

Is anyone doing ANYTHING?

Yes. Censoring The Pirate Bay has led to the rise of many Piratebay Proxy sites, which can be easily used by one to access all torrents of The Pirate Bay.

For India’s issue, Anonymous has launched Op_India. There is also going to be Occupy India, with Occupy Delhi coming up on 9th June. You should follow Op India on Twitter, and like this page for regular updates.

As a internet user, there are a lot of things you can do.

The Internet Defense League aims to have a kind of a “Bat signal” for the internet. A code is given to a webmaster, and the code is updated when some movement is launched. If the webmaster updates the code, he takes part in the protest against the movement.

Stop American Censorship is another movement by Fight for the Future, this is specially for the US.

Not is US? Petetion against State Department!

Google details some easy steps with Take Action. Google launched Google Take Action, which allows user to take part with a simple tweet, and google’s hashtag. The tags are counted, and then are used against internet censorship.

Stop the Internet Blacklist Bills is a site promoted by Mozilla, which needs a simple zip code.

Demand Progress is aimed to stop the internet blacklist bills, and adds you against the US senators.

Just following these steps will make you a better net citizen. Who knows, your vote might be the deciding one in stopping Internet Censorship?

Namanyay Goel is a freelance web and graphic designer. He blogs at Mos Le Tech, about SEO, Technology News, and Design.

Other Interesting Articles From Featured • Internet