Free days before we shared some sets of free eBooks related to Viral Marketing. Today I’ll share some of the unbelievable free eBooks of Seth Godin, an American entrepreneur, author and public speaker. 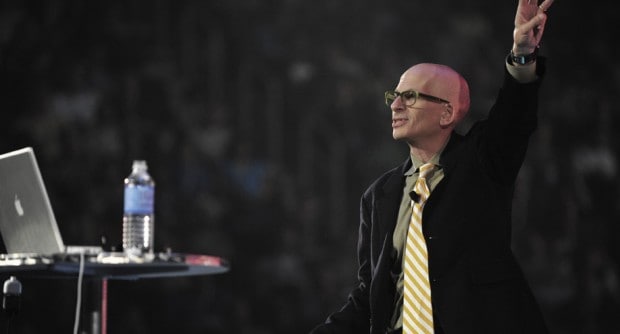 Seth Godin is often described as “America’s Greatest Marketer”. He is the founder of Squidoo.com and it is one of the top 125 sites in the US. Though I was not following this blog regularly, I’m one of his biggest fans. I used to read his stuffs on Wikipedia and also read some of his books. So I thought of starting this New Year with awesome collection of free eBooks. 🙂

#1 – What Matters Now : This eBook is about a different way of thinking, a useful way to focus and the energy to turn the game around.

When the economy tanks, it’s natural to think of yourself first. You have a family to feed a mortgage to pay. Getting more appears to be the order of business.

If you make a difference, people will gravitate to you. They want to engage, to interact and to get you more involved

#2 – Who’s There? :This eBook tries to sell you hard on how building a blog asset can have a spectacular impact on you, your career, your organization and your ideas.

Seth Godin divided the blog world into three groups and turn his attention to one. And in particular, He tries to sell you hard on how building a blog asset can have a spectacular impact on you, your career, your organization and your ideas.

He promises this ebook is incomplete. He hope, though, that it encourages you to pay attention to some of the underlying forces at work online and off.

#3 – Knock Knock : This eBook is a short take on how to use the new online marketing tools to make any website work more effectively.

Knock Knock is Seth Godin’s Incomplete Guide to building a website that works. A Web page isn’t a place the way Starbucks is a place.

A Web page is a step in a process. The steps on the stoop in front of your house understand (if steps understand anything) that they exist in order to get you up or down.

#4 – Unleashing the Ideavirus : Seth Godin’s Unleasing The Ideavirus is about permission and viral marketing.

#5 – Really Bad PowerPoint – And How To Avoid It : This eBook is about improving your Powerpoint presentation and some mistakes you should avoid.

PowerPoint was developed by engineers as a tool to help them communicate with the marketing department—and vice versa.

The programmers behind PowerPoint saw it as a clever hack—a way to save time and money instead of creating slides the old fashioned way. Once unleashed, though, PowerPoint took on a life of its own.

#6 – The Bootstrapper’s Bible : This eBook is about getting more done with less and running as lean as possible when bootstrapping your business.

Bootstrappers run billion-dollar companies, nonproﬁt organizations, and start-ups in their basements. A bootstrapper is determined to build a business that pays for itself every day.

In many ways, itʼs easiest to deﬁne a bootstrapper by what she isnʼt: a money-raising bureaucrat who specializes in using other peopleʼs money to take big risks in growing a business. Not that thereʼs anything wrong with that…

#7 – Do Less : This eBook tells about what you do and who you do it for so you can enjoy more of your life.

Most organizations, from tiny to huge, operate from the same perspective. As you add employees, there’s pressure to keep everyone occupied, to be busy.

Of course, once you’re busy, there’s a tremendous need to hire even more people, which continues the cycle.

This is an ebook about a brand new online company and, more important, about a new sort of online tool that might very well change the way you discover (and publish) information.

For most of us, it’s not about the money at all—it’s about spreading our ideas.

When was the last time you noticed a cow? Saw a cow on the side of the road, pulled over and gawked…Not likely. Cows, after you’ve seen them for a while, are boring.

They may be well-bred cows, Six Sigma cows, cows lit by a beautiful light, but they are still boring. A

#10 – Flipping The Funnel : This new ebook explains how some of the new Web 2.0 tools (flickr, del.icio.us, squidoo and others) combine with ideaviruses and the Purple Cow.

The math is compelling. Most of the people in the world are not your customers. They haven’t even heard of you, actually.

And while many of these people are not qualified buyers or aren’t interested in buying your product, many of them might be—if they only knew you existed, if they could only be persuaded that your offering is worth paying for.

You say to the prospect: I will work with you to build a four-page engine of revenue.

The idea: the client loads it up with targeted traffic that he buys by regularly trying and testing adwords and other relevant, measurable media. (if the client is willing to spend enough, she can buy as many people as she wants to visit her site—once.)

#12 – Brainwashed : This eBook is about what you’ve been conditioned to do and how to change that thing.

The mission: to teach you that you’re average; That compliant work is the best way to a reliable living.

That creating average stuff for average people, again and again, is a safe and easy way to get what you want. Step out of line and the system would nudge (or push) you back to the center.

#13 – Money for Nothing (and your clicks for free) : This eBook deals with the aspects of bring traffic to your website.

After you build a page on Squidoo (or a blog, or anywhere else on the web, for that matter) there’s an almost irresistible urge to panic. Panic, because you’ve put in all this work and then you feel sort of powerless. “No one is looking at my page!”

It’s human nature. We want to be noticed, we want our effort to pay off and we hate to fail.

#14 – The Tribes Casebook : This eBook is about Seth Godin’s private tribe when he launched his book Tribes.

Eventually though, most of us realize that the Tribe of Normal People doesn’t actually exist. There’s no bond between the non-disabled. There are no leaders among them. There are no rules. It doesn’t exist.

#15 – Insubordinate : This eBook related to Seth’s latest book Linchpin: Are You Indispensable?

I lump the last three together as one kind, because I don’t think they deserve categories of their own. Even though they’re the majority in terms of numbers, they don’t matter so much in terms of getting things done.

The first group, the Linchpins, are the people who make a difference, the ones that ship, the rare ones that truly have an impact. This group of people, in that moment of time, change everything.

#16 – Flipping Politics : This eBook is a slightly different edition of ‘Flipping The Funnel’ for politicians.

Marketing is a funnel. You put undifferentiated prospects into the top. Some of them hop out, unimpressed with what you have to offer.

Others learn about you and your organization, hear from their peers, compare offerings, and eventually
come out the bottom, as patrons, converts and supporters.

#17 – Flipping Non-Profits : This eBook is a slightly different edition of ‘Flipping The Funnel’ for non-profits.

If you’re like most marketers, you’ve been spending a lot of time trying to shovel more and more attention into the top of the funnel. After all, if you can expose your idea to enough people, you can afford to buy more attention, to run more ads, to put more people into the top.

As we’ve seen, though, the amount of time and money you need to keep that funnel filled can explode your
budget pretty quickly.

Do tell us which one of these is your favorite? And I would like to wish all my beloved HBB readers, “Happy New Year”. 🙂