Why You Should Buy An Android Phone Over Apple iOS! 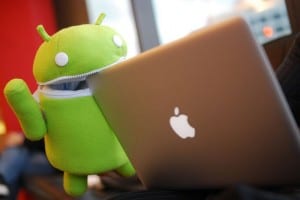 It is never clear what to buy when you have two of the best choices to make from i.e Android and iOS. If you are one who is confused on what to end up your decision on, then its going to be a difficult time ahead for sure. If you ask for help, Apple Fan will always recommend you Apple and Android Fans will always recommend you Android. There is also another class of people who have experience on both and may help you decide on which one to pick.

Personally I don’t have the experience of Apple that much but Android has always been my foreshore play. In my view there is something that Apple’s iOS lacks that Android gains on. Can you guess what it is? I will uncover that as we travel through the article.

It is one against the many leading Hardware manufacturers when you count on the rivalry. But what is it in for a common man like you and me? Its the versatility and options that you get. When you think of iOS, the most you can get is Apple iPhone 4S and other three models. What about Android? You have Samsung, Sony, HTC and many other top manufacturers who bring in better designs and hardware specific to a certain class of users.

I am in no way saying that Apple doesn’t have the Technology advancement but you should consider it on a wider scope. 4G has been in the news for many months now and have you got an iPhone with 4G yet? Well, NO! On the other hand there are manufacturers who come up with new phones every now and then which allows them to integrate the advancements. More often than not Apple launches a new phone after 6-8 months and if there is a new processor in the market can you expect it on an iPhone? Well not for a month at least but that might not be the case with Android phones. You can have a look at list of Best Smartphones to judge better.

Developers love to work on Open Source projects and Android is one such platform which has been able to lure thousands of developers into its webs. Apple though allows developers to make Apps but they are never allowed to play with the core whereas Android does give them that option.

You cannot change some default things in Apple. This may not be a big issue for some but people who love to take advantage will feel that Apple is playing hard on them.

Paying extra for storage really hurts me! Yeah, you must be aware that you will have to pay extra if you need extra storage on your iPhone because it doesn’t allow you the option of using Memory Cards as an expandable storage. Whereas almost all Android phones come with Expandable Memory options except for a few. So you get an advantage of expanding whenever you want and that too at a very reasonable price.

Though there are certain cloud storing options that are proving to be useful but still replacing physical local memory is not possible at this point.

Customization is one thing which will always keep Android in the front when you compare with Apple. You have tons of options to customize which you won’t get with Apple’s iOS or the Windows Phone OS.

There are also developers who constantly float in new Custom ROM’s which bring in so many functionalities which actually makes Smartphone purposeful.

You Can Afford Android in Any Price Range

Not everyone has 700$ to spend on a phone and that brings another advantage for Android over Apple. You can buy Android phones in any budget but with Apple, it’s a fixed price and it is high that not all can afford.

It doesn’t mean that Apple doesn’t have advantages over Android but for me these are more than enough to help me decide on buying an Android Phone.

This article is written by Sandeeep Singh. He writes at NthBlogger on topics related to Blogging, WordPress and Social Media.

Sandeep Singh is the editor of Technoleash. He is a Engineering student and Blogger. He owns almost 10+ blogs and he is trying his best to start'em. Connect with him on Google+.