All the browsers are in a race, every browser wants to topple one other. Browser Wars are going on for many years. There are lots of great browsers in the web right now, the top 5 are :- 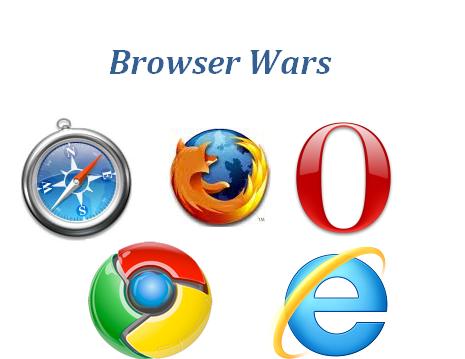 Well, I guess IE has the top position because of Windows. Most of the people in the world use Windows OS and IE is the default browser in it so mostly they use IE. I guess Mozilla Firefox has earned a lot of fans from its last versions and also from the latest version. That’s why it is at the second spot. Google Chrome has been an all time favorite browser for me since it has launched. I have used Google Chrome the most. Safari and Opera are nice browsers with some great features in both of them.

Personally, I love Google Chrome and I like Opera. I use Google Chrome the most, I thought that I should take a little break from Chrome and try the new version of Opera since it says that it is the fastest browser on earth. I tried Opera and I liked it too but after a few days I switched back to Chrome.

Firefox used to be a favorite of mine before Google Chrome was launched. But I tried to switch back to use Firefox 4 but I really couldn’t get used to it even if it has some great features.

Internet Explorer 7 and 8 actually didn’t impressed me at all but after using Internet Explorer 9, I felt that IE is back with a bang. IE 9 have amazing features. The only bad thing is that it is not available for Windows XP as I mostly use Windows XP.

Coming to the conclusion, here are my top 5 browsers.

This guest article is written by Vinayak Nagri. If you wish to write for HBB, kindly check this.

He is 17 year old. He has been blogging about SEO, Social Media, Blogging Tips, Technology ever since he was 12.