A Bite on Jobs’ Uncanny Apple 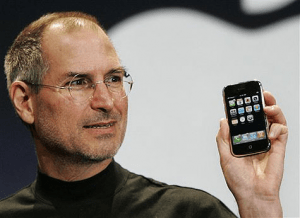 The George Clooney stubble, the smoothly delivered swagger, the air of a born leader—these are all just a fraction the world can get from the Macintosh supremo Steve Jobs. Yet beyond these salacious sketches he constantly get from the press and fashion icons, and across his adios to the magnum opus he has done for Apple, small business players see something others cannot: his thinking cap that’s as big and wide as the Pacific.

1984, the year Jobs released Macintosh, or now loosely called Mac, was a definitive year for technology industry. The inception of Mac eschewed the prophetical dystopian George Orwell novel 1984, which anti-technology activists used as a bible of their belief. Not even competitors succeeded to stop its introduction to the public, not to mention the legal name dispute with McIntosh Audio Equipment manufacturers. From that day forward, the rise of Macintosh has been so unstoppable and inexorable—from the first-ever dourly designed box computer to the not-so appealing iPhone4. Macintosh has become a household name— and so has Job’s unforgettable surname.

Imagine life without Job’s thinking cap, without his vision, without his cojones to say that his inventions are pieces of puzzles to change the world. True, without him, there would be some other Steve Jobs out there to introduce Mac or the iPhone or iPad or iPod, but fate has given all of this to him; Steve Jobs was born to do his calling, his job.

Indeed, Jobs has influenced a lot—hundreds, or possibly thousands—of small business players around the globe. His acumen for copying poorly designed products and improving them has taught lots of North Asian businessmen to recycle and facsimile ideas that lead to a massive faking of his own technology line. His fetish for simple design pioneered a new design revolution that rekindled minimalism in new products on the market. Even his fetish for software simplicity seemed to be starting to make a trend since many German and Japanese technology industries that aim to find a place on American market are making phones, music players and tablets with features and navigation that are obviously copied form Jobs’ inventions. Looking back on the very first Apple Computer Apple I, no one thought of it as a future granddaddy of inventions that would change every people’s lifestyle—no one but Steve Jobs and the few people who stood by him during the early humdrum days of Apples’ inexistence.

The Cook is the new Job

Now, the hardheaded, demanding CEO decided to let go and pass the still-fiery torch to Cook. For an industrial engineer and fitness enthusiast with lesser appeal than his superior, the lessons he has learned from his now-celebrity boss is enough to save himself from ongoing questions of his capacity to lead the abandoned company. Now that it is not only Microsoft to crush their name should they stumble and fail to hold the top spot, he knows that the weight Jobs left on his shoulder is not just a jest or mere public affectation.

This article is written by Warner Carter. He enjoys writing about SEO, Marketing, and Website Development. He works with Endless Rise who provides SEO Reseller Packages as Private Label SEO exclusively for resellers. If you wish to write for us, kindly check this.

Warner is a guy who likes the net and tech stuff, especially SEO. I work at an SEO Reseller company Endless Rise.