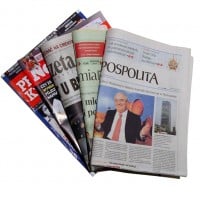 A press release, news release, media release, press statement or video release is a written or recorded communication directed at members of the news media for the purpose of announcing something claimed as having news value (via Wikipedia). Press release submission have two benefits.

These two things are one of the most wanted things for a webmaster these days. Let me explain how will you get instant traffic from Press Release.

Secondly when people browse these sites for news and updates they will go to your site as well, but it needs your press release to be well written to catch the interest of people.

Press release as a source of powerful links

Almost all the press release sites allow you to add your links, some allow only 1 and some allow 2-3 links, which will help you because these sites ranges from PR5-PR9, and links from high page rank sites are always helpful, and powerful links will help you to get good ranks in search engines. Also these links are the source of direct traffic.

How to write a press release?

What kind of press release is best?

If you want to write a best press release then you must take care of following things.

#1 – Your press release must be unique.

#3 – Your press release will be more good if its connected with an event.

#4 – An active even on press release.

All these points need to kept in mind to create a good looking professional press release, so it will never get rejected. 🙂