In case you haven’t heard, Myspace is back on the radar and it’s been completely revamped with the help of new owner, Justin Timberlake. The site was there all along, but a significant amount of users deleted their accounts, and then kind of just forgot that Myspace ever existed. Our guess is that no one ever thought Myspace would make a comeback, and they certainly didn’t expect to ever rejoin the site.

At the peak of its popularity, Myspace was the most visited site in the world—even over Google. The site had millions of members, including individuals, bands, and company pages. So what happened? Why did so many users decide to up and leave? Well, there are a couple possible explanations, the first being that people left in favor of Facebook, which was relatively new but growing rapidly. The other possibility is that people were turned off by how sketchy (and dangerous) Myspace had become.

By sketchy, we’re referring to the fact that Myspace was home to various criminals, including pedophiles and murderers who used the site to find their victims. There were several highly publicized crimes that were attributed to Myspace, which likely played a key role in most people’s decision to leave the site.

So now the question is whether or not Myspace can ever truly make a comeback, or if people have shunned the site for good. It’s too early to tell since Myspace is just now attempting to execute its comeback, but some people are already speculating that the site has no chance of regaining the popularity it once claimed. We, however, don’t like to jump the gun with preemptive assumptions about the site’s impending success and/or failure. In the spirit of comebacks, we’d like to give the new Myspace a little more time before we start making bets on its fate.

A Myspace comeback does seems plausible, especially since the site is now backed by Timberlake, who is one of the biggest stars in the world. The new site was recently rebranded as a social entertainment network, meaning that it has a heavy focus on music, arts, culture, and lifestyle. We have to admit, the new interface is clean and visually appealing. The majority of pages belong to bands and musicians who wish to showcase their talents online, but the number of individual accounts is growing. This is a good sign for Myspace because it means that people are returning to create new accounts.

In The Wild Wild West Of The Internet, Anything’s Possible

It’s far-fetched to predict that Myspace could ever make it back to the top of the Social Media ladder, simply because of Facebook‘s massive success. But as we all know, nothing is set in stone and social media trends are always in a state of flux. So who knows, maybe Myspace will regain the coveted title of most popular social media site, and then again, maybe it won’t even get close. We’ll just have to wait and see!

Do you think Myspace will make a full comeback? Let us know in the comments!

MySpace was the most popular social networking site in the United States during 2006. Still many people use it even after Facebook and Twitter buzz. MySpace has lots of cool features which are not present on Facebook.

MySpace Events is as popular as Facebook Events, and I was suggested to make this simple ‘HOW TO’ tutorial for some online awareness groups. Creating an Event on MySpace is quite simple and here is the procedure for it. 🙂

#2 – Select ‘Events’ from the top navbar or go to use this link.

#4 – Now you need to enter all the details related to your event. For example, location, date and time, host, description and so on. 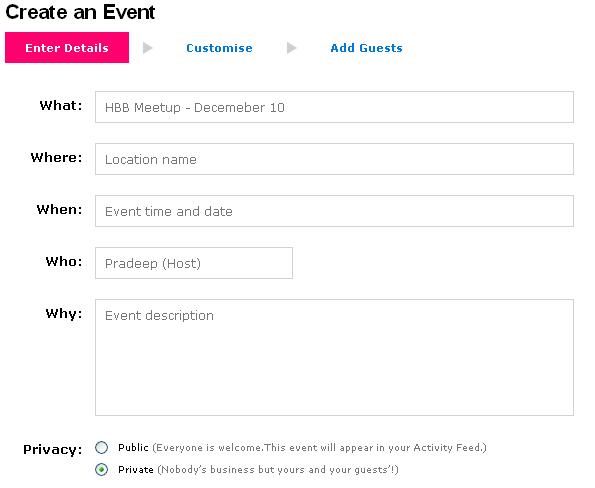 You have several options like limiting total number of guests, enforce an age limit, and more.

After completing everything, select ‘Save and Continue’ and you will get a mini-preview of your event. That’s all your event is created now.

You can add guests by selecting friends, if you haven’t, and select invites to them. Cheers.

Related ‘Create An Event’ Series That You Should Not Miss

Hope you would have found this simple tutorial useful. If you are using MySpace, then do connect with me and join HBB MySpace Group.