Guest Blogging: So Why Should You Care? 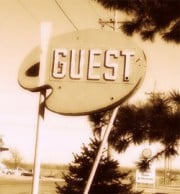 Last week I was pointed to a great post by friend Jane Sheeba titled You Blog. Should You Guest Blog?. While most commenters seemed really excited by the concept and the idea of guest bloggers, there were still some people who questioned the benefits of the tactic.

But I fell in love with the concept from the very first time I heard about it from Ann Smarty running My Blog Guest – the community connecting guest authors to blog owners.

While guest blogging is viewed increasingly in terms of link building nowadays (and that advantage is quite obvious), I decided to try to list other backlink-unrelated:

What you need to appreciate is that guest blogging is not about the short-term benefits, though getting exposure on a particularly high profile site can certainly bring about a significant and instant surge of interest in your work.

Even on smaller sites a particularly well-written piece will often result in a writer gaining a number of new followers. Especially if the writer has properly targeted a site that relates to his area of interest and have appealed to the readers through the great content.

Feedback from a Targeted Audience

Of course it isn’t realistic to expect hundreds and thousands of loyal followers to just appear because you made one or two guest posts. However, getting some form of fresh feedback on your work from these unfamiliar readers, even if it’s just in the comment sections of the site you guested on, can prove to be an absolute gold mine of information when it comes to improving you future efforts.

Getting enrolled and replying to new feedback is a great way to show people that you are interested in what they have to say. This alone can help attract more followers to your cause (even when your initial piece wasn’t enough to sway them either way), as people love to know their opinions matter, so make sure you take the time to engage with people who have provided you with feedback.

This is really a no brainer. The more you write about any given subject field and the more widespread your writing becomes; then the more of an authority you get regarded as in any given field. Of course this can work both ways, meaning if you are known for putting out low quality, nonsensical content then your reputation will be worth less than nothing. Which is another reason why listening to feedback (especially in the early days of a writers career) is so important.

However, if you put out high quality, informative articles about your niche, ones which people respect and enjoy reading, then every time you make a guest post you are only strengthening your position by increasing your reach to a new audience.

Providing good guest posts isn’t just about getting new fans, its also about making contacts with co-workers, potential publishers and partners. By providing free high quality posts for sites, writers begin to become sought after for guest and paid positions.

Not to mention people who have successfully contributed to a content network or publishing house in the past, are far more likely to receive a favor when they want to promote their own projects with those organizations in the future.

So hopefully by now you should be able to see why website owners love guest bloggers (because it’s a way for them to obtain great fresh content that they don’t need to pay for).

Even when a blog doesn’t actively advertise that it’s looking for guest bloggers, if you have a good idea for an article which you think would fit a particular site well, it is always worth writing to the editor and seeing if they would be interested in your contribution.

It’s a good idea to have your article ready in full before applying for a guest blogging position – that way when you send it to the blog owner they will be able to quickly decide if they want to publish it or not. If they do want to publish your work, then they will, though it’s always worth asking them to let you know, as you should reclaim the piece (for use elsewhere)if they haven’t chosen to use it within a reasonable period of time.

So do you guest blog?